Do you remember the Asian fashion dolls that moved in a while ago? I had plans to paint them during the lock-down. Or rather that lock-down. But somehow they ended up in a box. I think maybe I really am just a BJD collector as far as a lasting interest in working with the dolls goes. The other dolls are fun, don’t get me wrong, but they stay “just dolls”.

But since I am now proud owner of a magnifying lamp with LEDs I decided to start with the repaint of my fashion dolls. This lamp makes working on Barbie-sized or even smaller faces a lot easier on the eyes. I have not finished all of them, but once I have, you will see them all of course.

What I want to show you today is my attempt to turn a truly ridiculous looking doll into something worth looking at. I came across a very cheap jointed Barbie doll on Ebay, and since one can always use a jointed body, I bought her. I didn’t realize that it was in fact not a “made-to-move” body, but a doll from a series called WWE Superstars. Stupid mistake, but I was very tired when I hit the buy button.

The WWE girls are slightly larger and a lot more muscular. But the torso and legs are actually quite pretty, maybe even prettier than the Mtm-body. I am not really a fan of the arms and the short neck, but they are ok. And she has large high heel feet in her flat feet boots, so finding shoes for her will be difficult. If anyone knows of shoe sharing options, please let me know in the comments.

But the face… well, let me say there’s room for improvement. It’s the most caricatural looking Barbie face I have ever seen. Massive jaw bones and a chin that would suit a Christmas nutcracker. I actually had to laugh when I took her out of the box. Her features looked less prominent on the promo pictures.

I decided to see if I could use my rubber carving tools to take off some of her excess jaw and chin. So far I took a good chunk off, and she looks a lot more natural now. I forgot to take a picture of the original blank face or one in side view, but maybe you can still see the difference. I think I will turn her into Barbie’s mom. You will see her once I have finished the repaint. 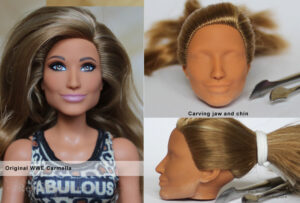 When she turns out how I hope she will, the head will go on a Fashionista body. The fashionista Barbie I have has been in the house for a while, but unfortunately I ruined her first repaint. I tried to take off the head, which is not a good idea when it is customized. The sealant turned white, even though I heated the head up and tried to be as careful as possible. My experience with customized Barbies was very limited at that time, but at least I know better now. I repainted her again, and this is how she looks now: 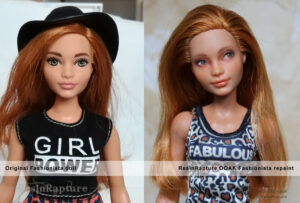 The picture above shows the original head on the curvy Fashionista body, and her new look on the WWE body. I think this hybrid looks really good, fresh, fit and healthy. I just have to make her some less “fabulous” clothes. And paint the shoes black ;-). She has tiny scratch marks on her forehead (thanks to her previous 7 year old owner), but it doesn’t really show.

Here she is in all her glory: 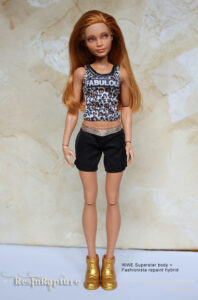 Kurhn head on a Blythe body

Another repaint and body swap I am really happy with: a repainted Kurhn doll head on a pure neemo s body with wobbly neck peg.

I didn’t take “before pictures” of this little girl, so I have to make do with the promo picture of her- which doesn’t quite match reality. Since I have a couple of spare wobbly neck Blythe bodies, I thought it would be fun to test how this hybrid would look. I think she’s absolutely adorable on that body. The Kurhn head doesn’t sit well on the steady neck body, but the wobbly neck works perfectly. 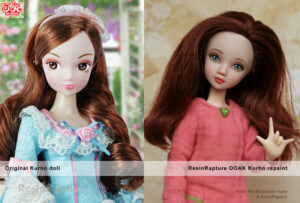 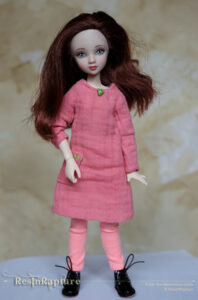 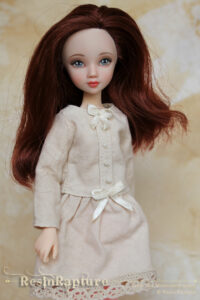 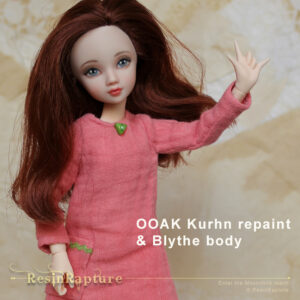