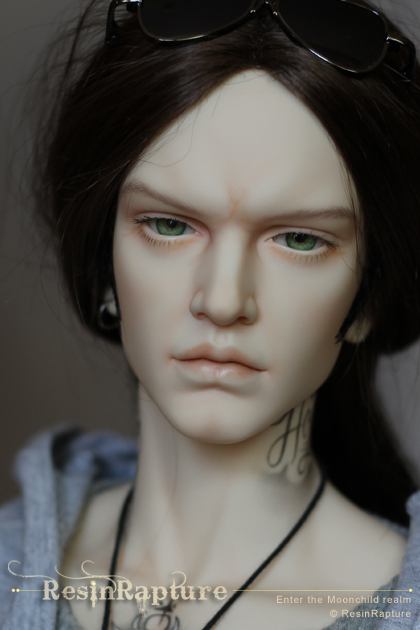 Ruben and his daughter Sophia are currently staying with the Morrigan sisters. And Stella and Seraphine hope that he’ll stay for good and for Tristania, but Ruben and Tristania have history and a complicated relationship. Quite suspenseful.

He is an old childhood friend of Tristania and although they haven’t seen each other for fifteen years they still have chemistry. A lot, actually. Nothing ever came of it back then, he was immature, rash, often irresponsible and got involved with the wrong kind of friends, mostly because he wasn’t good at being alone.

Tristania was the one who set him straight and helped him, she was the one he turned to for advice. She liked him very much as a friend and felt attracted to him but didn’t want to take it further.

They lost contact over the years after he met the mother of his daughter, who is a fascinating and passionate beauty but turned out to be a highly manipulative, narcissist psycho case. She turned his already troubled life into heaven and hell, mostly hell after the first year. She used to disappear for weeks without warning and left him with his baby daughter. He had to take responsibility, and he grew up the hard way.

As dysfunctional as the relationship was, it changed him for the most part in a good way, but there’s also sadness and guilt and shame for not realizing early enough how much Sophia suffered. He tried to make the relationship work for his daughter’s sake, believed his girlfriends promises and suffered the consequences for 13 years, which is not really a long time for Moonchildren, but long enough to end his feelings for her.

About a year ago he found Sophia unconscious after she took all her mother’s pills, and all her mother could talk about was what people would think of her as a mother if they knew Sophia tried to kill herself – and that was why she didn’t take her to a hospital. That was kind of an eye-opener, and Ruben left with Sophia as soon as the drugs were out of her system. Moonchildren are hard to kill after all. They spent months on the road until he finally found the courage to call Tristania for help.

And now they’ve been staying with Tristania, Seraphine and Stella for two months, the kids get along great and Tristania and Ruben spend long nights talking. He feels like he is finally coming home to sanity and he has always trusted Trish to know what to do.

And she is getting to know the new, changed Ruben- who still has a thing for her after all these years. And she knows that it’ll be easy to fall in love with him if she allows herself to throw her usual caution to the wind. And since they both share a love for Heavy Metal and motorcycles there’s a lot of opportunity to just have a good time and enjoy each other’s company.

They both don’t want to rush things or even talk about a possible future, but there’s so much chemistry that they don’t need to. They both know that it will happen sooner or later, and since it’s a very big house there hasn’t been any talk of him looking for a place lately.

The creation of Rubens ink