The creation of Ruben’s ink

Ruben‘s ink is a part of his character, and I spend some thought on what it should look like, the meaning and last but not least how to go about it.

He hung out with a werewolf motorcycle gang in his rebellious youth and he loves Heavy Metal. He struggled with being a Moonchild when he was younger and growing up also meant coming to terms with what he is –  and some of his ink would reflect that.
But he also has a dark sense of humor and a self-ironic view on his own attitude in the past. Ruben never was an extrovert character (Tristania is the only person he is really opening up to), so no bright colors for him.

I didn’t want him to look like a jailbird with a patchwork of small designs. Most importantly, I wanted his ink to look as real as possible, which means not as crisp and shiny as a decal (or most Photoshopped tattoo pics), but a little blurred and subdued by the way healed skin reflects light.

As a professional tattoo artist I was curious how working on a doll would be different from working on human customers. On the plus side: dolls don’t wine about the pain, they don’t flinch and if necessary they can be disassembled. But the joints would pose a problem, and I wanted the body blush to shine through, so I blushed him first. And of course the choice of materials and techniques is limited by the requirements of resin dolls.

I prefer to see the design in relation to the whole body, so I decided to leave him assembled and just cover the other parts with clear film.

Since he was already blushed I wanted to keep the wiping at a minimum and decided to do the designs on paper first instead of developing the design directly on Ruben’s body.

I pretty much started out as I usually do with customers: I took his measurements. His anatomy is pretty realistic, muscles are where they are supposed to be, so going with their flow wouldn’t be different. I’d love to cover the complete shoulder, but that would limit his range of motion severely – or damage the ink.

This is the sketch for his right arm. A full sleeve Biomechanic design. There is no specific meaning to this, he just likes it. 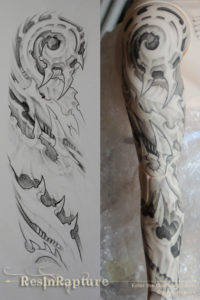 The next step was copying the drawings onto his body parts. I did the outlines first, like I would with a real tattoo. I also darkened the parts that are supposed to be black, but the details and shading would be added later. 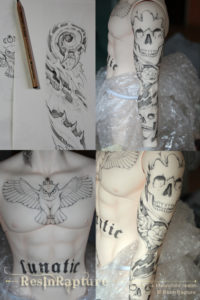 Once the basics were done I had hours of fun with drawing details and shading. I used watercolor pencils in different shades of grey. (And at least 2 litres of coffee, listening to Ruben’s favorite Bands Lamb of God, Evergrey and Volbeat) 😉 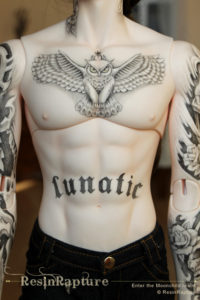 Since I’ve been asked I’ll add a list of the what and where and the meaning of his ink.

His neck is covered on both sides, a rose on the right and the lettering “hope” on the left.
There was a white rose climbing up to the window of his childhood home, white roses in the moonlight and the scent are what he remembers as the first impression of beauty, and the choice of both designs were influenced by coming to terms with his heritage. And in combination with skulls they’re very Heavy Metal ;).

His chest piece is an owl crowned with the Moonchild symbol.
The owl is also a Moonchild thing. Owls are part of the old Moonchild myths, they are part of the culture.
The lettering “lunatic” is just Ruben’s sense of humor. He had it done back in the days when he had his bad boy phase as the member of a motorcycle club.

Ruben’s left arm is covered in skulls and roses, he’s a metalhead after all. And he just likes skulls, just as he likes the look of the Biomechanic design on his right arm. His back is still blank, he wants to see his ink. But he’s got centuries left to have it done, so maybe he’ll have a back piece one day. The letters “stay true” on his fingers don’t need an explanation.

And now, since you have been patient enough to read all this, some pictures of the finished work. He is usually not the kind of guy who likes to run around half naked, but he stripped for you. 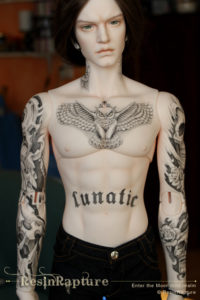 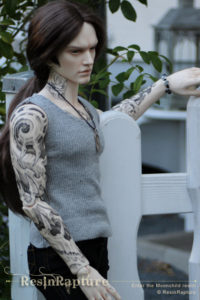 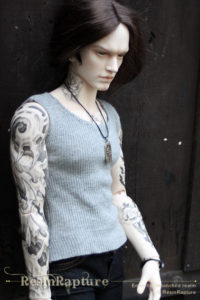 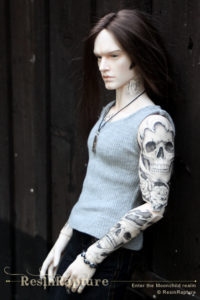 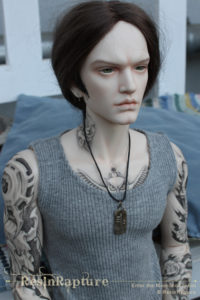 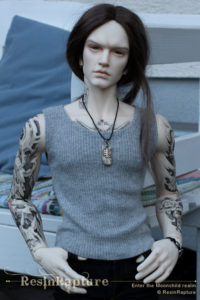 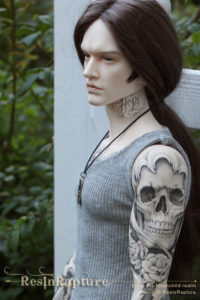 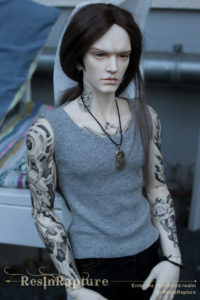 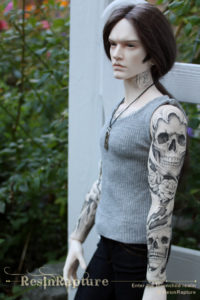 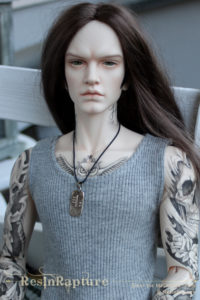 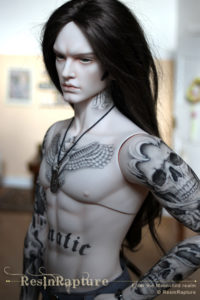