Since I know that quite a few of my followers collect other dolls as well as BJD I thought I’d write about something a bit different today. Except one Fashionista Barbie I didn’t own any dolls that are not resin BJD. Well, maybe the dollhouse dolls I kept from childhood days (which appeared as props in some of the KID pictures), but they don’t really count.

But I recently came across this little girl on Ebay while I was looking for tiny doll buckles. Somehow she spoke to me, I don’t even know why. Maybe it’s hormones or the whole COVID situation, I had the sudden need for super tiny and cute. A tiny doll that could sit on my desk, without the fear of yellowing or a fall.

She was not even 10$, but I still did some research before I followed the impulse to hit buy. Because even though she’s plastic, not ball jointed and appeared to be just a cheap play doll I didn’t want to buy something that wasn’t an original Chinese branded item. I wouldn’t even buy a wig cap from a seller that sells recast BJD, but the seller was just one of those China shops that offers almost everything, including a couple of dolls.

I talked to some fashion doll collectors to learn more about her, and had a closer look at the other dolls on offer. And since I had a little chat about the other dolls with a blogger friend I decided to write a bit about what I learned. But first things first, I bought her, and here she is. She arrived in a rather battered box, with a little hairbrush and a bag. She’s just about 26cm tall (that’s about 1/6 scale).

What I have here is a Manny princess doll. Manny dolls are cheap supermarket toys of Chinese origin. Apparently princess doll or Xinyi is used as a general term to describe fashion doll sized dolls, like some people call all dolls in that size Barbie, even if they’re Simba, Bratz or something else. 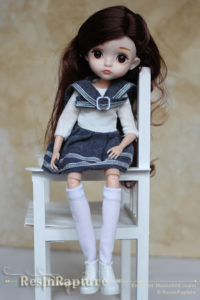 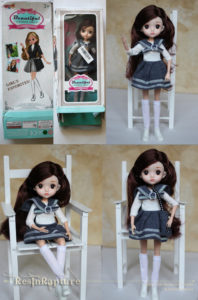 When it comes to cheap dolls from China that are offered on Ebay or Aliexpress there’s always that general suspicion of something dodgy in regards to the whole recast issue, even if the dolls in question are not resin dolls. I just don’t know enough about fashion doll sized dolls that are not BJD to be sure they are not copied, so I tried to look into plastic dolls of Chinese origin a bit more.

If one of you has anything to add or more insight, please share in the comments!

There are actually a couple of China branded dolls that appear to be safe to buy – at least as far as the copy issue is concerned. We are talking plastic and unstrung now, even though they are offered as BJD. At least the DBS dolls (and Ucanaan BJD) have ball joints and they come in the same size categories as BJD, but other than that they are just a different type of dolls.

So, first China toy brand is DBS CUL or DBS toys. Those dolls come in 1/3, 1/4 and 1/6 size, look like BJD, but they are not strung and factory made plastic dolls. The company has an official website, and the fashion doll sized dolls are called MMgirl line.

In the Barbie size range there are Kurhn dolls (the China branded aequivalent to Barbie, and the most popular Chinese doll brand in that size), 3DEyes dolls and Xinyi as well as Xiaojing. It’s a bit confusing that all of them pop up in search results for each doll brand, but the original dolls look different enough to tell them apart. 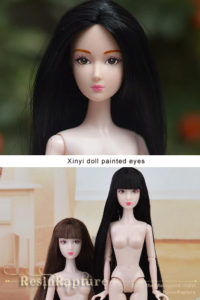 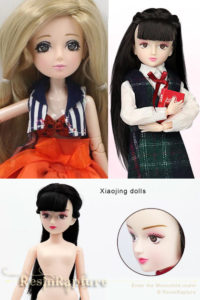 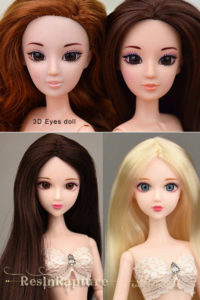 I found a body review for xinyi dolls on this blog:

As far as repaintability (is that even a word?) is concerned, Kurhn, Xinyi and Xiaojing, Meng Fan and Kissmela fashion dolls might be of interest, since they have painted eyes. 3D Eyes dolls and DBS dolls as well as Ucaanan dolls have eye sockets with lashes and acrylic eyes you can’t remove, so it would be hard to repaint them.

And I guess the Japanese Licca dolls are so well known that I don’t need to mention them. Other dolls I wasn’t aware of before is the Korean younji doll and Tangkou dolls, which are Blythe-style dolls with oversized heads but very long noses. They look different enough to assume they are not meant to be pretend-Blythes.

After looking at so many different dolls I might get a Kurhn and a Xinyi. It would tempt me to repaint them, but I guess they would stay in a box after that.