Raffine shipped much faster than I expected, and I fetched her from the customs office on Wednesday. I wasn’t sure if the size would feel right, but I actually love it. It’s a fun size, easy to handle. She came a bit floppy, but I want to suede her anyway, so tightening the strings won’t be much of a hassle. For some reason the extra hand parts were outside her box, and I was really lucky nothing broke.

I don’t have enough time during daylight hours, so their faces will have to wait until after Christmas. And all my other plans as well. I’ve started too many projects. It starts to get stressful, and where’s the fun in that? So I will pack all the stuff up and store it out of the way (heaps of stuff that demand attention are stressful as well) and get to them one after another. 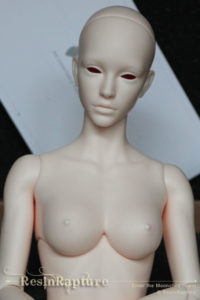 All the more to look forward to. And I did something stupid- at least considering that I already have so little space left. I got a horse. A big horse. But at least it doesn’t need to be stored in the dark, so that’s a plus.
And it arrived to today. I have to say, I am pleasantly surprised that it has actually more sculpted details than I expected from the pictures. I was already thinking of modding it, but maybe a repaint and a bit of sanding will do. Dapple gray would be nice, or maybe it’ll stay brownish – but with a lot of lighter parts. I am not sure yet.
To give you an idea of the size: Big new guy with a Breyer classic. It’s ridiculous, really. And my cat, who wanted to say hello to the new guy. The horse is missing any gender specific parts, but the neck doesn’t look like a mare’s, so I’ll make it a gelding. It’s an ourGeneration horse. 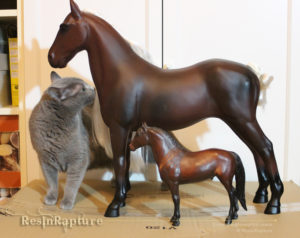 As an addition to this post a picture of Raffine’s heel feet in DeeAnnaDenton shoes. I had to warm them up to get them on, it’s not really a fit. But it would be, if the shoes would be just a tad wider and longer. Most other Tonner shoes that go on are too long. If I could get my hands on soles this size I’d make some myself. 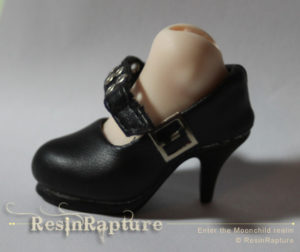