The weather is typical April weather, sunshine one moment and hail the next. We had snow over Easter – it didn’t last, though. I am glad all the flowers that are already in bloom survived.

I promised I would make some new spring outfits for the big girls, and Unnea was the first. I wanted to make something that was not entirely white, something she could wear in her laboratory. A bit like scrubs, but not quite. A white and green muslin tunic and white leggings. She reminds me of snowdrops in this combination.

Unnea is on my oldest body, she gave the EID body she came on to Tristania and got Trish’s SID body in exchange. The body is from December 2013, and it’s yellowed quite a bit- even though I keep all the dolls in the dark. But my first three girls were made before Iplehouse changed the resin, and I had them on display for about half a year. It really shows. I can’t imagine how yellow they’d be by now if I kept them outside. And every time I take pictures of her I think I should get her new hair, but somehow this annoying wig became a part of her character. I have tried other wigs on her, but she seems to want to keep this one. 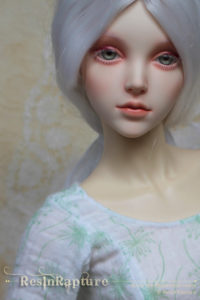 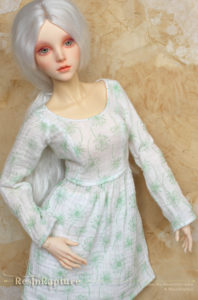 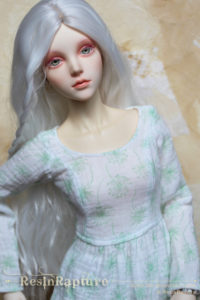 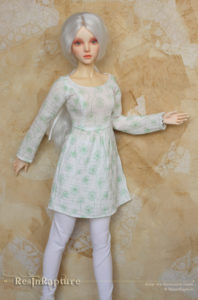 8 thoughts on “Snow in April”