Carving and painting Blythe faces is really fun. And of course the changing eye colors and the chance to add lots of fancy bling to the pull strings. Pull string beading is not just decorative, the weight of the beads pulls the sleep-eye string down. Without the weight the eye lids would close.

And since I started my little crew with just a head and faceplates and needed to assemble them, I had to find strings that would fit through the mechanism. I had some white kite line back from kite flying days. It does not only fit perfectly, it seems to be the exact same nylon line that’s used for them by default.

But while the kite line works perfect as a string, my assortment of beads with large holes is very limited. So I decided to make the beaded part with a thinner string and beads I already had. It’s cotton crochet yarn, about 3 cm in the middle are crocheted for the loop. I attached the beaded part in a way that would allow me to take it off quickly to open the head. Maybe it’s not the most elegant way to do it like this, but since the knot is not visible I don’t really care. For the last two girls I didn’t even cut the string, just made a couple of knots above the connection bead. You can see the connection part in the third picture.

Also in the third picture are the Noosa chunk pendants I love to use as weights for the sleep eye strings. The number of available button designs is endless – and of course you can make your own buttons the same way you can make eyes. 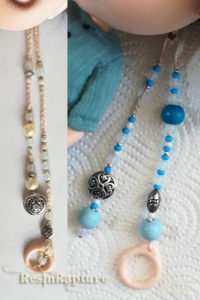 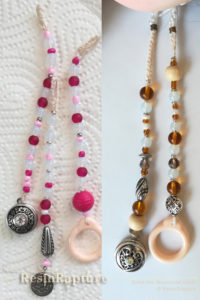 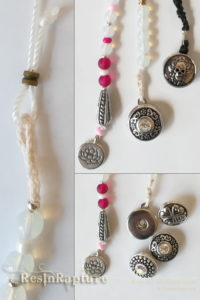 Which brings us to the eyes. I just released the Spring edition eye sheets and made more eyes than my crew could possibly wear. But it is FUN! And since I found a nice little helper for closed-head eye changes, I can change the resin eyes in a minute to match outfits or just for fun- at least the forward looking eyes. The resin eye chips are easy to get out anyway, usually by poking a needle somewhere into the side. But I don’t really like to do that, if you get the needle between the print and dome, the result might be a white scratch. And if you try this without opening the head, the chips can fall inside the head and you need to open it anyway. 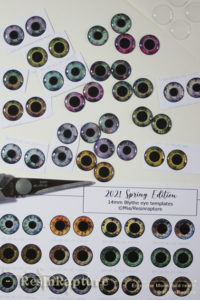 But I found this tiny suction thingy in a clutter box and the suction cup has exactly the size of the eye. I don’t even know what it’s supposed to be, it was a give-away from a super market. They were called emojis or stikeez. There are rubber micro suction cups you can buy for mobile game control, I guess they do the job just as well. 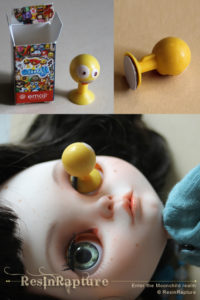 Some of the new Spring edition eye designs in a doll. I will probably change some of them again, but that’s the beauty of 4 pairs of eyes. I can let them keep them just for fun, even if the color or pupil size doesn’t suit the character. I prefer the smaller pupil eyes for the side ways looking eyes, but I know that many people like their pupils really large. They look a lot younger- and probably cuter. 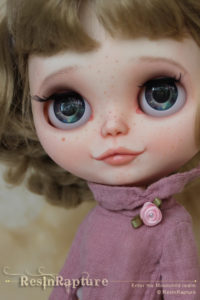 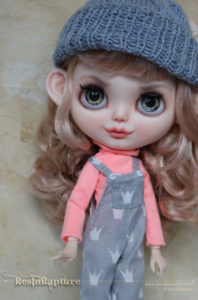 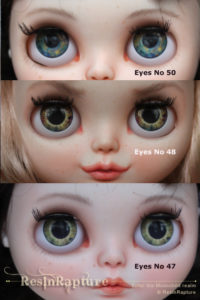 I find myself thinking about customizing more of these little buggers. The fact that I can not only paint but carve them to give them their individual unique face is just too tempting to resist. I hope you can endure a couple more Blythe posts :).