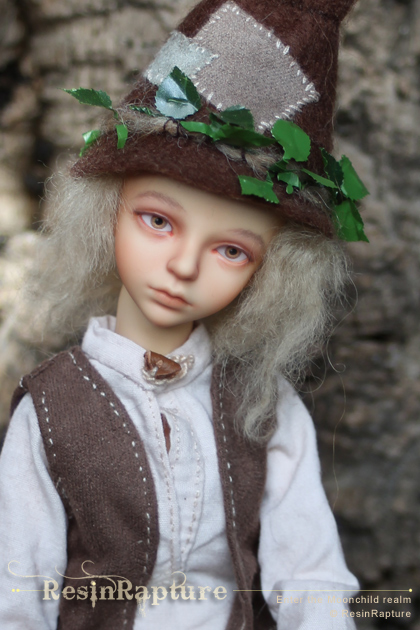 This little guy is a member of the Tree People, also known as Tree Folk. His English name is Willow Twig. In his own language his real name would sound like a mixture of bird song and the rustling of leaves, so I think we will stick to Willow.

Tree People are very small, just about the size of a squirrel, and almost as quick. They can be found high up in the treetops or down on the ground, foraging for berries, nuts and seeds.

Depending on the climate and humidity they either live underground between roots or high up in the trees. They often built tree houses from woven twigs and moss. You might have seen one of those houses during winter, most people mistake them for mistletoes or bird’s nests.

Willow’s home is a willow tree hole. It’s his birth tree, and all his relatives live around this tree. Either in other holes or nesting in the branches. It’s their family tree.

In the Tree folk language every tree has it’s own name, it’s an addition of sounds to the name of the tree species. And every member of the family that calls the tree their home is named after the tree as a part of their full name. Tree Folk men move to their wife’s family tree if they bond for life.

Willow spends his days roaming the woods – when he has finished his chores, that is. And Tree Folk children have a lot of them. During winter it’s harder to find food, but they have collected a lot of nuts and mushrooms before it got too cold. There’s still a lot to do during winter, weaving baskets, making and mending clothes, preparing food and of course telling stories. Tree Folk are great story tellers, and Willow loves to sit and listen while he works on something.

But Willow also loves to be out and about. He made friends with a hare that let’s him ride on his back. Willow and his friends spend their free time with stag beetle races, climbing competitions and all sorts of things that get them very dirty and are a lot of fun.