Removing the eyes of a Paola Reina doll

One of the main reasons for my recent vinyl additions to the doll family was the idea that it would be fun to repaint them, or maybe even carve them. Something I wouldn’t want to do with a resin BJD. I have done mods before, but even sanding resin is a potential health hazard. Carving vinyl is like carving rubber – a lot less dusty. I am not sure if I want to modify all the Reinas, I really like the sculpts as they are. But I will repaint them.

Anyways, before I can start repainting them I need to change the eyes. I am still waiting for new eyes for the large dolls, but the old eyes have to come out first. I wanted to see them before I ordered new eyes, otherwise it would have been more practical to do the eye-swap as long as the head was hot in one go.

But how to remove the eyes of a Paola Reina doll?

Since I had a couple of questions myself before I tried it the first time, I thought I’d write a bit about removing the eyes for those who have the same questions. I googled for an answer before I tried it, and I found some posts and videos about removing vinyl doll eyes in general. They involved boiling hot water, possible damage to eyes, hair and hands. I also didn’t know what kind of eyes are actually in the sockets when they arrive and if their hair is heat resistant.

Paola Reina vinyl is pretty soft, so I thought maybe I can try something else before I resort to boiling a head- or rather put the head in a bag and hang it in a pot with boiling hot water. I have to admit that I was a bit afraid of doing that, and I didn’t want to risk damage to the hair. Since I don’t want to re-root them I wanted to keep the hair as it is.

What you can see in the picture below is all I used on the large dolls, and I managed to remove eyelashes and eyes without any damage to the doll or eyes and lashes. With the smaller head I really used the plastic bag-hot water version, it was easier to really just dip the wrapped face in a mug.

The blue gel pack is a simple hot-cold gel pack I kept from one of my numerous dentist nightmares. It’s large enough to cover the face. The black thingy is a tool from a very cheap clay sculpting kit. It has a tiny metal ball on one end and a silicone rubber sculpting shaper on the other. And a pair of tweezers to grab the eyelashes.

I laid the doll on the back an put some drops of warm water with a bit of dish detergent in her eyes. The head was still on the body to keep it steady. After a couple of minutes the glue dissolved and the lashes came off easily. Since they came off unharmed in one piece I put them in warm water to remove the rest of the glue later with a Q-tip.

I removed the dolls head and rubbed off the rest of the glue from her eye lids with Q-tips. After heating the gel pack in very hot water I placed it on the dolls face and wrapped a dish towel around it to keep the pack from cooling down too fast. When the doll head felt warm enough I used the metal ball to apply pressure to the inner corner of her eye from inside the head. It’s easier if you press on both cheeks and squeeze the dolls face to an oval shape. The eye came out of the inner corner quite easily, and I used the silicone rubber side to lever the eye out from the outside. 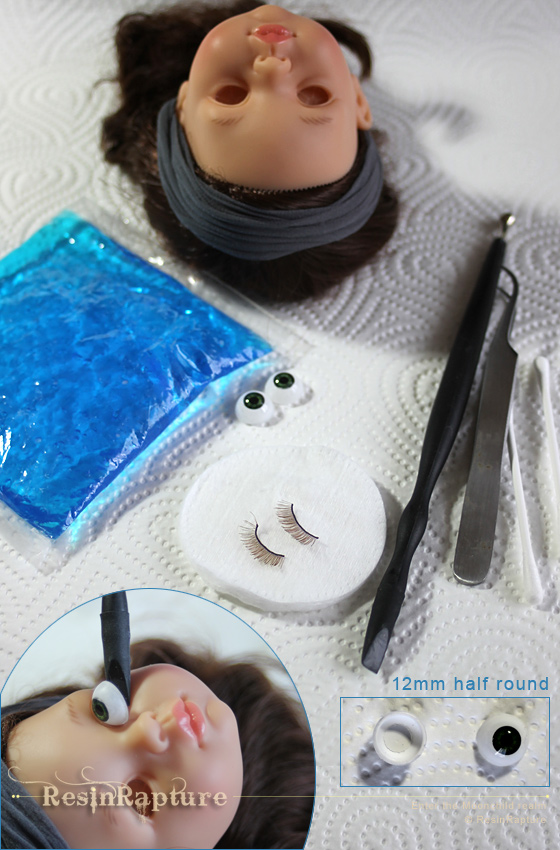 The eyes she came with are 12mm half round acrylics. They actually look like the top half of acrylic BJD eyes (the round-with-stem-kind of eyes you usually get with a doll). The eye sockets are thin vinyl, I guess it would be easy to cut them open to use eyes with putty, but since you can’t open the head you would need to adjust them by sticking one finger into the neck hole.

The easiest eyes to put back in are the 11mm soft silicone Eyeco eyes you can see below. Since they are silicone, they go in with the help of a fingernail, but I actually like the large irises for their faces better. I will probably find some nice oval flat backs for them. I have 13mm Eyecos as well, but I didn’t want to cut them, which would have been necessary to get them to fit. To put hard eyes back in she will need the heating procedure again, and I need to do that before I start repainting them. I am not sure a repainted and sealed face would take kindly to the procedure, even though the face paint she comes with survives an eye change unharmed. And of course I will have to tape the new eyes to protect them from the sealant, at least if they’re not glass. 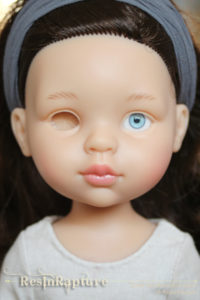 I hope this was helpful for those who are as afraid to try removing the eyes of a Paola Reina doll as I was. Piece of cake, really. :). Putting eyes back in is the hard part ;). It works best with oval flat backs, first slid them into the inner eye corner and then you need a bit of forceful pressing them into the eye socket. Which is a lot easier if the head is really warm and kind of flexible. The last picture shows my little newly customized Mini Amiga. She wears 6mm Glatzki eyes I still had from my eye haul. I love the color, but like all Glatzki eyes they look a bit eerie. 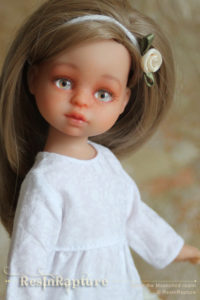 12 thoughts on “Removing the eyes of a Paola Reina doll”