I usually don’t post about things that are not doll- or sewing related, but I’ll make an exception today. And since Finn and Peregrin helped, it’s not entirely without dolls ;).

As some of you might know I have a garden. It’s just a small backyard garden with an old brick wall and lots of bee-friendly perennials. It’s also a very bird-friendly garden, I have two bird baths and a nest box for blue tits. Since I put it up at least 25 little blue tits grew up in it, and a lot of them seem come back to visit my garden. At least I think it’s them, they seem to know my garden well and are cheekier than other birds. I had a small bird feeder, but it fell apart after the first winter.

And with all the left over wood from doll projects I decided it was time for a new bird feeder. Finn and Peregrin helped to built it. 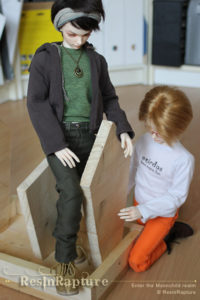 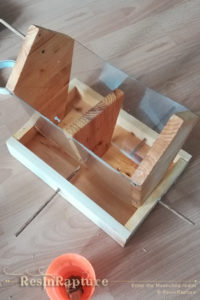 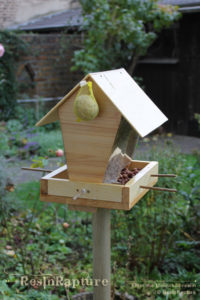 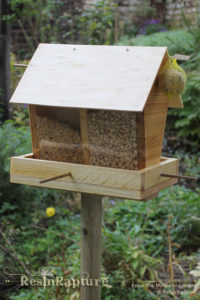 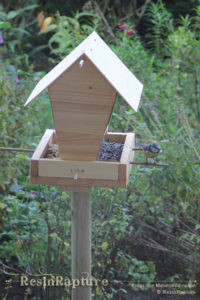 It has been out in the garden for three days now, and apart from a happily chirping clan of great and blue tits it has already been visited by several chaffinches, a jay, woodpeckers, black birds, a robin, a goldfinch and a bullfinch. I’ve been looking out the window way too much, I should be working ;). But it’s so much fun, and I wonder what birds will find their way to the take-away when word gets around. And since I made it with seed compartments I don’t need to refill it every day. Hopefully the construction will reduce the amount of droppings on the food, too.

And last but not least something entirely different:
I also just finished a new shirt for Everett… 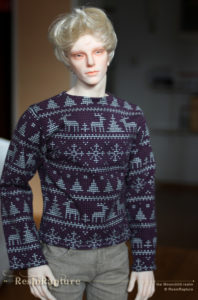 6 thoughts on “Boys and birds”