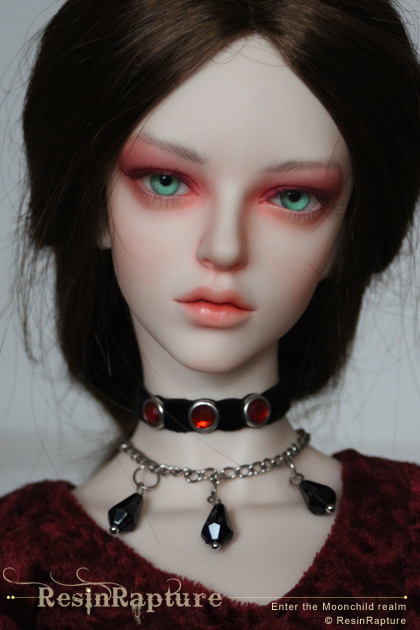 Vasilissa is one of those Moonchildren with special gifts and skills. Her mother joined a coven of witches when Vasilissa was a little girl, first just to have a place to live after their house burnt down. Her mother had friends among the witches and she was welcome to stay.

She was happy to have found a new home, but she needed to pay her way and make herself useful. She wanted to learn how to use the craft and asked the witches to teach her the basics. Vasilissa showed some talent for magic and soon the witches started to train her, too.

The coven members had no qualms about using dark macig, they were living in dangerous times and they had to defend themselves as well as earn a living from all sorts of potions. And with her mother dabbling in the dark arts the little girl did not only learn child safe spells. She was taught not to use potentially harmful magic against friends and family, but the ethical aspect of using dark magic wasn’t an issue.

Vasilissa realised at a very young age that her talent for magic was extraordinary for a Moonchild, and she learned to keep her progress a secret. She was fascinated by the ingredients and complicated rituals of dark magic but lacked moral guidance. The result was a very skilled, very powerful Moonchild witch who still had to learn to control her temper, so yes, she was dangerous, too.

Half a century later it is still not advisable to make an enemy of her. But she grew up and she makes a distinction between off-limits magic and magic she will use to earn a living. As a rule, she doesn’t use dark magic on living creatures, unless it is absolutely necessary. She uses her skills for protection spells, to lift curses and for other purposes required by supernaturals.

Vasilissa’s services have been requested by Solovet, who has worked with her before. She came to take a look at some ancient necklaces that are believed to be cursed. While she’s at it, she’ll give some of Unnea’s ingredients the necessary enhancement.

Vasilissa does not only have an arsenal of spells, she is also an unerring knife thrower. She spends most of her money and time on her friesian stallion Dies Irae, and she loves riding at night.
Her usual outfit is as contrary as her character: a combination of form-fitting dress –  preferably velvet, leather and combat boots.