Iple ladies have difficult feet. Hardly any shoes for SD girls fit them properly, and even the JID girl’s feet are not easily shod. Except for Iplehouse shoes, of course. They offer a nice selection of heels and boots, but not that much variety in flat shoes.

Shoes that match just this dress – or that. Maybe with a handbag of the same material. Not much hope finding something like that, so I decided to give it a try and make some.
I already had leather, heavy weight iron-on interfacing and felt sheets, some other stuff and a little time. I have ordered some soft & stable interfacing (it’s used for bag making), but I haven’t tried it yet. But 180g/m² interfacing works pretty well. I need to get my hands on some thinner felt sheets, or some other material in various colours. The thick stuff works well, but they’re a bit hard to sew.

The top is sewn to the inner soles, the seam is flattened and covered by a glued in cardboard sole of the same size (as you can see in the second picture). For my test pair I just added a  piece of heavy weight facing to stabilize the heel, but with thinner fabric it’s better to cover the complete insides. 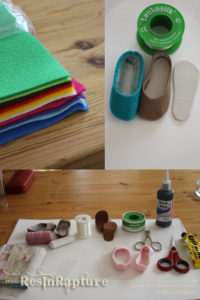 First I used thin iron-on interfacing (Vlieseline e. g.) to cover the felt and the cotton used for the soles. It prevents stains and you don’t have to worry about fraying. I cut out the forms adding about 3-4 mm seam allowance and marked left and right foot – it’s hard to see which is which once you’ve sewn the heels otherwise. The inner cutouts can be used for side parts of a matching purse, so you might want to keep them.

After making the tiny darts I stitched the heels together. Since I wanted a folded down small rim it just looks nicer if you can use the seam along the rim to flatten the heel seam to each side – although it’s easier to sew the rim first and connect the heels after. To attach the sole I turned the top part inside out and pinned the soles to the big toe dart at the adjustment mark as well as to the heel seam.

To keep the form it’s necessary to make sure you sew along your pattern drawing lines. The seam will be on the inside, and to flatten it to the sole I made some tiny cuts and stitched it down to the sole. It’s a little extra work, but it will make sure you don’t push the seam up when you slip in the cardboard sole into the shoe.
I used silk tape to cover the cardboard and glued it to the inner sole.
After that you just need to glue on your leather soles and you’re done –  except for the embellishments of course. I used an old belt for the leather soles, but I’ve seen bags of shoe leather scraps for crafting offered on ebay. 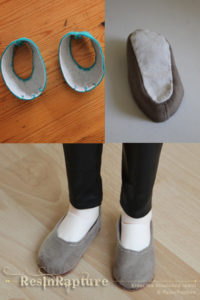 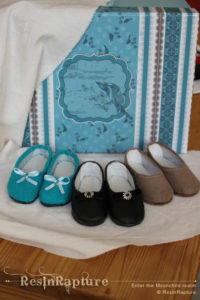 Update on the shoe soles: I’ve found a more convenient way to do this. See making shoe soles the easy way 🙂