Water color dress in the making

I have a box full of fabrics that could be labeled “fabric for procrastinated projects”. Mainly because they are what I consider “uncooperative fabrics”. Chiffon, organza, tafetta, voile, velvet and other materials that are never staying in place, are hard to work with or require some special treatment to keep them from fraying. But since I love the colors and the look I decided to use some of the chiffon for a new dress for Nimue. She has only two dresses, and I originally bought these water colored fabrics for her.

I don’t own a hot knife, so I used a candle to melt down the edges. It required a bit of practice to get the distance right, just close enough to melt the fabric, not burn or brown it. Since chiffon is rather see-through I used some thin interfacing for the top. My idea for the skirt was to make layers in different shades of water-like colors. Nimue already has a see through dress made from light blue voile, and I wanted this one to be a bit more substantial.

First step was the top and the fish fin coattail. I made the fins in the same shade as the top and used white voile for the parts in between. Some waterdrop-shaped crystal beads at the end of each segment will weigh down the ends and hopefully add to the overall water nymph look. 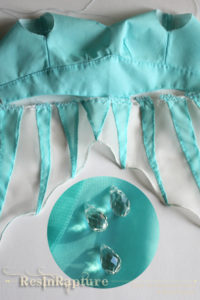 The second layer is the same color as the top. It has a slight upwards curve towards the center that follows the curve of the fins. The third layer is a slightly darker shade of chiffon, the hem is asymmetrical. 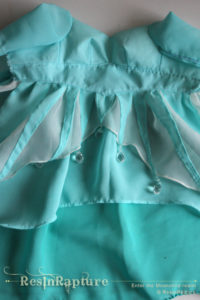 The basic skirt is made from cotton. I used a gradient dye in the same color palette as the rest. I should probably have dyed the bottom a bit darker, the gradient is not very visible. I wanted to add some more waterdrop elements, but I didn’t want to pierce the cotton with the rhinestone rivets I planned to use for this. And I wasn’t quite sure if it wouldn’t be too much. That’s why I decided to make a separate skirt from white tulle and apply the rivets to the tulle. If I don’t like the overall look I can just leave it off. 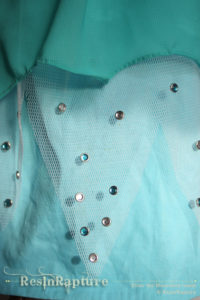 For the same reason I made the belt separately. 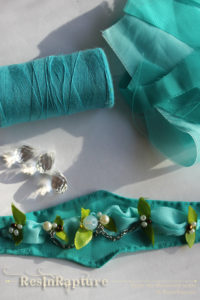 Now I just have to add the closure in the back and take lots of pictures of Nimue in her new water nymph dress. And you know what? Chiffon IS uncooperative. It was fun anyway, even if it took about 4 days to finish this part.

6 thoughts on “Water color dress in the making”