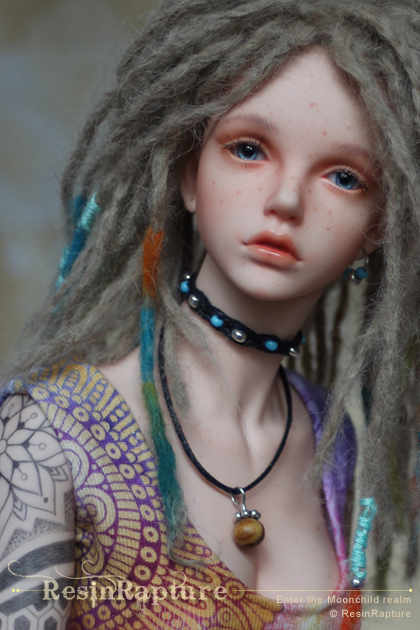 People who meet Dandelion and Karla Dante would never guess they are sisters. Half sisters, to be precise, they don’t have the same father. Propably the reason why they look so different. It’s always just been their mom and them, their biological fathers have not been in the picture long enough to be remembered. Karla is five years older, and she took care of her little sister right from the start.

Karla and Dandelion grew up in a trailer park on the outskirts of a small town with a lot of textile industry. It was a nice trailer park, most neighbors were retirees who took pride in tending their little gardens or improving their homes with all sorts of DIY handicraft activities. Karla and Dandelion’s mom worked long hours at a clothing factory, and the two girls were always welcome to a meal and a chat in the neighborhood. They remember a lot of kindness, laughter and a friendly community.

Their mom used to bring home remnants and clothes that didn’t pass quality control, and the two girls loved to take them apart and make new things from them. Dandelion had the ideas and Karla knew how to make them, or whom to ask and where to get stuff. It has always been that way and they enjoyed working together.

They sold clothes, bags, pillow slips and other things they made. And people loved their creations and soon asked for commission work. Later Karla and Dandelion started working at the same factory, and they learned a lot about the industry. But they had a dream since they were girls: They wanted to make a living from selling clothing they liked, unconventional outfits they couldn’t find in the usual stores.

They started out with a stall selling alternative fashion and jewelry. Some of it was self made, some of it bought. They traded at music festivals and traveled the country in their camper van. Two years later they had the funds to create their own clothing line. DANDELIONs GEAR was born.

Dandelion and Karla work very well together. Not only because they get along great, but because they complement each other perfectly. And they are proud of each other’s talents. They use to produce new items during the winter months and start to travel with the beginning of the festival season.

Dandelion is the creative master mind behind the scenes of DANDELIONs GEAR. She has most of the ideas (except the brand name, that was Karla’s idea). Dandelion is not afraid of bold color choices, and she has an intuitive feeling for what might sell or what a specific person might like. As the “little” sister she respects Karla’s greater experience and authority in many areas. It gives her the freedom to be unconventional and creative, because she knows that Karla will think about the technical aspects of the manufacturing process.

Dandelion always seems to vibrate with energy, at least when she’s awake. She is almost like a small child in that respect, she can work on a high energy level for a couple of hours and then she falls asleep. A short nap is usually enough, and she can sleep almost everywhere. Karla envies her for that ability. Dandelion is highly concentrated at work and all flying dreads and gestures when she talks. She is generally swift and deft with her fingers. Her mom says she got that from her Italian dad along with the tan.

Dandelion knows that it is the creativity that powers her, she loves life, people and working with her hands. Sometimes she starts to work on too many things at once and it gets stressful, but she is usually quite organized and disciplined in what she does.

Both sisters love to travel, but Dandelion is the one who really doesn’t like to settle down for longer. They use to rent a place where they can work and live during the winter, but come spring Dandelion gets antsy and wants to be on the road again. They converted an old school bus into a tiny mobile home, and that’s the only place where Dandelion loves to nest. She is also the one who likes to clean to clear her mind, and she does the cooking. But she hates driving the bus, and her sense of direction is terrible. As it happens, Karla hates cooking but likes driving, so they never fight over who should do what.

And Dandelion loves working festival season. Even if that means a headache after a long day of loud music and the desperate need for a clean bathroom, she loves the atmosphere, meeting people and the inspiration.

Even if there are chairs in the vicinity, Dandelion prefers to sit on the ground. Which usually entices other people to do the same. They had some fun camp-fire style business meetings due to that habit.