I recently helped a friend clear up after her wedding. The newly-weds are both overworked and underpaid and the bride is expecting twins, so they decided to have a low budget wedding and save the money for the kids.

They had table runners from some kind of white synthetic material. Kind of like paper but water-repellent, it was fancy paper, I believe. My friend had used paper doilies you would usually put cakes on as mats for floral arrangements. It looked lovely, and nobody cared that most of table decoration was actually paper.
When I helped her clear it up I saw that somebody had spilled some wine. The pattern it left on the table runner gave me an idea, so I kept some of it along with the doilies and some left over paper napkins.

As you might have noticed, my dolls often pose in front of light brown or beige backdrops. They make pictures look warmer, even when the light is not that great. Tea is one of my favorite dyes, I like the soft tones and the natural vintage look. I use to dye fabric with tea, but this time I wanted to use it for something a bit different.

So I got some cheap white canvas at Aldi, mixed some wallpaper paste with tea and set to work.

Have you ever heard of a technique called napkin decoupage? You basically glue small bits of paper napkins to your canvas of choice. There’s more to it, of course, but that’s what I did here. I soaked some of the napkins and doilies with tea and kind of wrung them to create that crinkled look. After they had dried I tore them into pieces and glued them piece by piece to the canvas using a brush and my tea-paste. 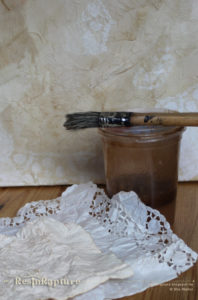 This one is made of tea-colored doilies and paper napkins, both were white before. I could have used some more light to take pictures-  it looks a bit darker than it acutally is. But you will see it in future doll photos ;). 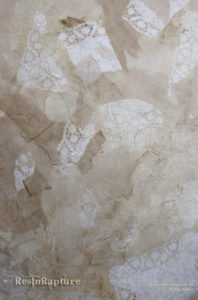 This one is glued to a piece of wallpaper, it dried up crinkled and uneven, and I added some more structure by using orange paper napkins as well as the tea-colored ones. It almost looks like something you could find in a modern art gallery, haha. But I really like the organic feel of the result. 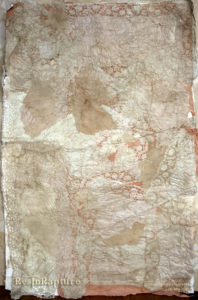 This last one is a piece of the table runner. It has a beautiful ornamental embossing you can hardly see in it’s original white and flat state. I used a tea-drenched sponge to gradually add color and ripples, letting it dry every time. You can see it’s some kind of synthetic material, it’s still a bit more shiny than I would have liked, but I still love how it came out. 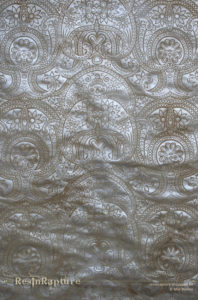 My friend saw them and asked for some smaller versions of these decoupage-results. They now have three small paper-tea-wedding-keepsakes hanging on the wall. I don’t know why, but it almost made me cry.
So, this was quite a chatty post about weddings, tea and trash… Anyways, I have some nice new backgrounds now :-).