I usually don’t post pictures of new characters before I have introduced them properly. But this time it’s not so much a character introduction as an introduction to one more sculpt with potential for a friendly smile.

A while ago my latest additions to the resin family arrived, Isabel and Tedros. When I ordered them I had some vague ideas about their background. Married couple, possibly raised in a rural religious community, plain clothes, biblical names, something like that.

Isabel was on my wish list for a while, but her husband had yet to be found. I wanted a guy with a determined, young face and an open friendly expression. The obvious choices are Claude and Oscar, but I already have those two. So I looked for sculpts with ‘hidden’, less obvious smiles and found Tedros.

I mostly came across the EID-Tedros in the tan version with dark hair and a hint of beard, and those Casanova-styled guys did nothing for me. Tedros never interested me as a large doll.

But my view of Tedros changed when I saw the FID sculpt. I thought FID Tedros might have the potential for a really endearing smile. Maybe it was the different face up, maybe the sculpt really is slightly different. It seems to be a little less triangular, more jawbone and less cheekbone.

Tedros comes with a very narrow nose bridge, a long nose and a bit of a furrowed brow. The company face up emphasizes those features with brows that follow the sculpt almost down to the nose bridge. Giving brows that downward angle is usually a good way to make a face look fierce. So the first thing to do was to give him friendlier eye brows, and the rest was just a bit of blush here and there to emphasize his natural smile. Glasses shorten his long nose, I will experiment with some more frames to see what suits him best, but I really like the frame he’s wearing in the picture.

Here’s a sneak peek of the result. I hope I was able to emphasize his friendly features, and those are even stronger than I had hoped for. I am more than happy with the way he turned out. He just feels right, and apart from instant bonding I am surprised how much I like a sculpt I wouldn’t have ordered if it wasn’t for the couple-plans. It’s almost funny – Isabel was the one I focused on when I ordered the two, and now she’s the one who is still in the box. Looking at the first picture he has almost a bit of Jim Morrison about him, don’t you think? It’s the hair, probably.

And if you are looking for a smiling guy, Tedros might be an option besides Oscar and Claude. 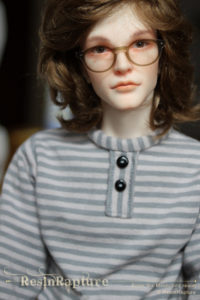 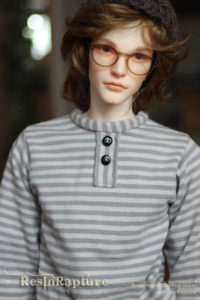