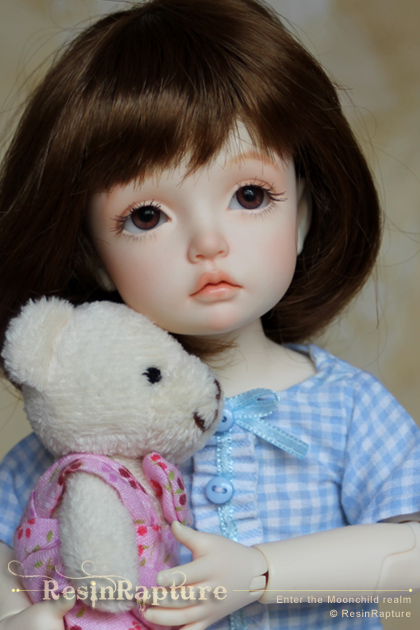 Amanthis is a foundling, and probably an orphan. Moonchildren can feel each other’s heritage, so it is known who her parents are, but her mother is dead and her father could not be found. She was left at the annual summer soltice gathering, probably because her mother felt that her end was near. Moonchild women can bear children at any age, but if mothers are past 600 years, giving birth and nursing children might lead to a lethal loss of strength.

It’s not unheard of that there are no relatives left to take care of a child and in cases like that children are given over to the community as long as the mother is still strong enough to travel. A mother’s decision to part with a child and leave it at a gathering like this is neither questioned nor judged, Moonchildren are traditionally raised by one or both parents and relatives, and in case of a foundling by members of the community.

Eryn volunteered to foster her, and Amanthis has been part of the MacLean family since then. There’s no such thing as adoption in the Moonchild culture, since the lineage can always be felt, but they are such a rare species that they kind of feel related, even if they’re not.

Unnea especially grew very fond of Amanthis, who doesn’t remember her birth mother and feels very much at home were she is. She is a sunny kid, hardly ever cries and there’s something about her that makes people want to pick her up and cuddle her. She is the youngest kid, and the other kids love to schlepp her about the house like a big doll. But she doesn’t mind, and she is far too curious to be clingy in any way.

Amanthis doesn’t talk much, though. She is taking everything in silently and as soon as she is watching what is going on with big curious eyes, people start to explain anyway, so she doesn’t need to ask many questions. And she loves to examine everything she can get her hands on, just touch it or take it apart and see how it works. She also likes hats and to play hide and seek for hours.