The black boots in the first picture came with my two new girls. I like them, but I originally ordered them in brown. By the time my dolls were shipping the brown shoes were out of stock, and I decided to take them in black instead of a refund. One can never have enough boots for the dolls, so they are a nice addition to the stash. And they are a bit higher than what I had been looking for, so I still needed brown boots for my plans. 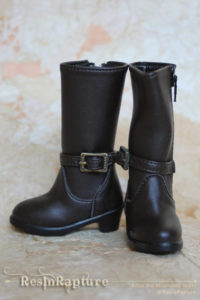 I found some Matt Tonner sized boots for the FID girls on Ebay that looked just right. They are from he-meife, one of my favorite sellers. And since I couldn’t resist Raccoon’s discount there will be another girl who needs boots, so I ordered some lace-ups in brown as well. This week I received the package, just one week after buying them. I hadn’t expected them before the end of October, but shipping was incredibly fast. 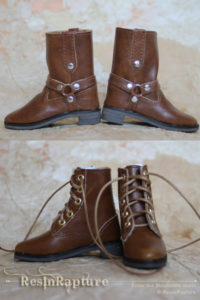 BJD shoes for FID from he-meife

The first pair was just right for what I had in mind: Boho boot cuffs for the FID girls. Two hours of fiddly work later my boot cuffs are ready to wear. Now I just need to finish the outfits to go with them. I am quite happy with the way they turned out, even though I would have liked the boots to be a bit smaller. But they were the closest to FID size I could find, and they are not that huge. The boot cuffs are really just cuffs, I can take them off or make more in a different style. 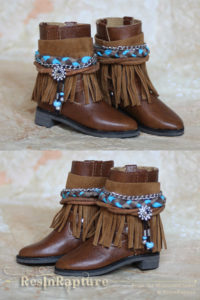 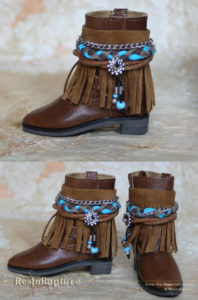 8 thoughts on “Pimp your boots”