When your doll picks the least likely wig…
Sometimes these little lumps of resin make their own decisions.
The two wigs I ordered for one of my new characters are not too bad, but not really satisfying either. I tried them in different positions, styled them differently, but the curls look too young and the brown cut is somewhat boring.
And then I found a wig in my wig box I got some time ago with a bunch of others, a reddish blonde with an unnatural orange tint, with strands of hair standing up in weird angles. I never seriously considered to use it, it just looked like a hairy mishap. I had forgotten about it until now.

I tried it just for fun, and what can I say: he loves it. It came to life, so to speak, and so did he. He just looks most like the character with this odd thing. I even ordered another wig in latte, just to make sure, but I have a feeling he’ll keep this. At least I was able to smooth it down a bit with hot water, and after washing it most of the orange came out. It looks almost natural in the pictures. Looks like I have to get used to reddish blonde. It needs some more styling, though. 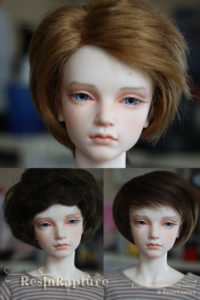